Bengaluru-based Gubbacci manufactures affordable custom-made apparel and uniforms and is eyeing a turnover of Rs 2 crore this year.
At the beginning of each academic year, it is common to see parents thronging tailor shops to order school uniforms for their kids. In other cases, few schools take the initiative to bring tailors to the school premises to place orders. However, the market for new school uniforms is huge and largely unorganized.

In 2015, sixty-four-year-old Madan Kumar launched Gubbacci to bring order to the unorganized apparel market and bring it online. Looking at the nature of the school uniform market in 2016, he realized that his company could venture into this area. With Gubbacci, Kumar plans to account for the differences in measurements and alterations, make it affordable and have quality products.
“We did some market research and found out the school uniform market was highly unorganised, and that major stakeholders in this market such as parents, students and schools were unhappy with the current situation,” he says.

“We wanted to reduce the burden on parents for acquiring high-quality school uniforms at affordable prices. We also wanted to ensure convenience by making online orders and home delivery possible.” 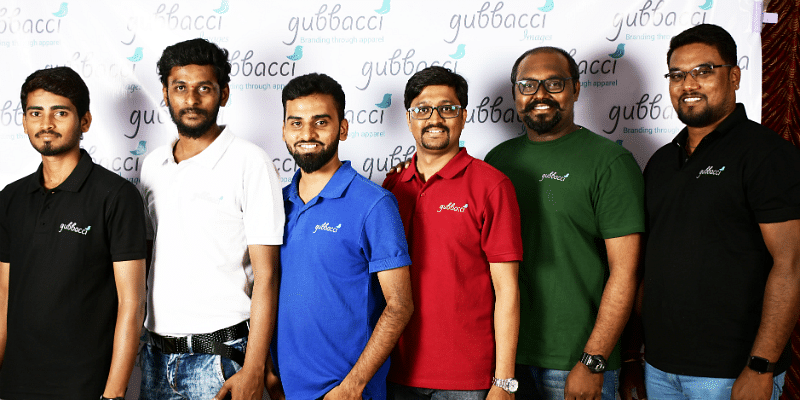 “When Gubbacci was launched, there was no professional place or company online or offline for customised apparel. It was very difficult for any organisation to buy customised T-shirts in bulk from a professional company,” Kumar says.

“Last year, our turnover was Rs 74 lakh and this year, we are on target to reach Rs 2 crore revenue.”

Stitching the idea together

The idea to start the company was born overseas. Madan Kumar’s son Harsha Vardhan, who was studying in Chicago, was interested in Threadless, a local company, which was in a similar line of work. “When my son and I discussed about Threadless, the lack of such a company in India inspired us to start Gubbacci,” says Kumar.

Kumar, who had earlier worked as a statistician with the Government of Karnataka, was a retired official. When the father and son decided to setup a company in India, they realised that it was difficult for Vardhan to lead the company as he was a Non-Resident Indian (NRI). But Kumar did not have any entrepreneurial experience. Despite this, Kumar stepped in and he now leads the company as the Director and Co-founder, and manages all the financial aspects of the company. Thirty-seven-year-old Vardhan is also actively involved in the business, albeit from a remote location, and is also a practicing pediatric pulmonologist.

When Gubbacci was launched, Kumar and Vardhan wanted to create a platform where artists and customers could collaborate on designer T-shirts, which would be mass produced. “However, we hit a lot of roadblocks as it was difficult to build a common platform for the artists and customers,” says Kumar. “It was after this point that we considered getting into the school uniform business because we identified a huge gap in this market.”

“Our unique selling proposition is that all uniforms will be made to measure. Our tailors will go to each school and take measurements of each student and stitch them accordingly,” Kumar explains.

“However, we noticed that requests for alterations were about eleven percent, which was unacceptable. We believed that if our tailors are taking individual measurements, the alterations and complaints should be minimal.”

This presented them with a unique problem. Why were complaints coming in despite attention being paid to each student’s measurements? After looking into it extensively, the two discovered that the students and parents were not part of the decision making process on the right fit for each student. Instead, they saw the tailors were making the decision for the customer. “To address this issue, we made size sets of uniforms, which means we made different sizes of uniforms, similar to ready-made garments in stores,” says Kumar.

Under this new model, these size sets were sent to schools, and Gubbacci staff helped students and parents pick the right sized uniform. “After introducing size sets, the number of alterations significantly decreased to less than one percent,” Kumar says. “This year, we had zero alterations from a school. This has also allowed us to cater to a larger number of schools across Karnataka, Kerala and Tamil Nadu.”

Kumar says, “We realised that though our tailors are experts, we should always include the customers in the decision making process, as they know the best. After this, we have taken some significant steps to be more customer-centric and provide excellent customer service. We are actively seeking feedback from our customers on how we can make the product and the entire experience better.”

Vardhan is referring to the new ‘One Hour T-shirts’ service, where anybody can custom design a T-shirt online and order it on the Gubbacci website. “These T-shirts will be ready to pick up in just an hour, and we offer same day delivery in Bengaluru and next day delivery for all other metros in India,” he says.

Apart from this, Gubbacci is leveraging digital in other beneficial ways. “One of our strengths is to bring this entire market online. We currently manage three websites, use customer relationship management tools and referral programme softwares, and have a significant presence on Facebook, Instagram and Twitter,” Vardhan explains. “We also spend considerable resources on our search engine optimisation and marketing, and have benefitted from Google AdWords and Google Shopping.”

Soon, the company plans to launch ‘Baby Gubbacci’, which will provide customised apparel for infants and children. By 2024, it seeks to be the leading “customer-preferred customised apparel and uniforms company in India.” The father-son duo also want to further streamline the processes for their customers and be able to complete all transactions online. “This is still an unorganised market and there is a lot of room for improvement and new ideas. We are also happy to collaborate with new players and share our experiences,” Vardhan says.